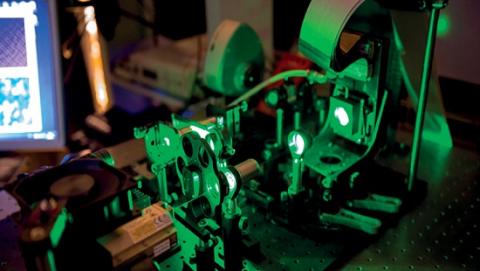 High-precision atomic physics measurements allow to probe a multitude of fundamental physics questions, from quantum electrodynamics to astrophysics, to tests of the standard model. Precision spectroscopy measurements in muonic hydrogen, to which the LKB group has been a main contributor, have led to the “proton size puzzle”, where the proton size obtained from muonic and normal hydrogen showed a 7 standard deviation disagreement1-3. The problem is still not fully understood. High-precision measurements with crystal spectrometers in highly charged ions have also improved our understanding of bound state quantum-electrodynamics—BSQED (see Ref. 4 for a recent review). Similar techniques applied to “exotic atoms” where an electron is replaced by a muon, electron, pion, or antiproton, have allowed us to test Chiral Perturbation theory for the strong interaction5 , and the nucleonantinucleon interaction6 . We also used pionic atoms to perform a precision measurement of the pion mass7. These systems may also contribute to tests of the standard model. It has been suggested, for example, that measurements in muonic atoms would provide limits on a possible muon-nucleon interaction8 mediated by a new 17 MeV/c2 “X Boson”, possibly identified by an ATOMKI9-11 in a series of recent experiments.

On the astrophysics side, improved knowledge of x-ray transition energies and intensities in highly charged ions has become critical for understanding stellar emissions and searching for dark matter. There is an ongoing debate surrounding a possible dark matter signal at 3.5 keV extracted from the HITOMI satellite data 12-14, show to be most probably x-ray lines from hydrogenlike sulfur in an ion source based atomic physics experiment15. Another interesting unsolved problem concerns the intensities of the brightest iron lines emitted by some astrophysical objects16, the Ne-like iron L lines. Their relative intensities have long posed a problem for plasma models 17, 18, a problem has finally been traced back to a strong disagreement between the most advanced atomic theoretical calculations and experiments19. We have observed similar discrepancies in high-precision reference-free measurements carried out on core-excited Li-like ions with our double crystal x-ray spectrometer on SIMPA (Source d’Ions Multichargés de Paris) in Jussieu20: theoretical predictions do not agree with the measured line intensity ratios.

New quantum technologies are now available for atomic physics that can shed light on these outstanding problems. The project proposed here will use both world-leading X-ray metrology techniques and new quantum transition edge sensor (TES) detectors to make precision measurements of highly charged and exotic atoms for multi-faceted fundamental physics studies. This novel combination of expertise will directly benefit astrophysical applications, as one of the members of the muonic atom collaboration described below (S. Watanabe) is also part of the design group in charge of the new X-Ray Imaging and Spectroscopy Mission satellite—XRISM (http://xrism.isas.jaxa.jp/en/), which will be equipped with a TES detector and launched in 2021. It will perform high-resolution X-ray spectroscopic observations of the hot gas plasma wind that blows through the galaxies. The progress in TES calibration techniques will directly benefit to the analysis of the data collected by XRISM.

The PhD project has three parts. First, highest-precision reference-free measurements on few-electron heavy ions will be performed with the crystal spectrometer at SIMPA in Paris, to explore the problem of line intensity ratios and energies important for QED studies and plasma physics. Second, the candidate will use a quantum sensing detector to contribute to a new measurement on hydrogenlike uranium using the storage ring of the FAIR21 facility in Germany, to probe QED in the high-field regime, improving the current accuracy22 by a factor of 5. Finally, the candidate will combine their new expertise with both quantum sensing detectors and crystal spectrometers for precision measurements of transitions between Rydberg states in muonic atoms at J-PARC in Japan. Advanced calculations by the LKB team have recently shown that these exotic atoms offer a complementary and more accurate probe of QED contributions than highly-charged ions, as the nuclear size and nuclear polarization effects are very small in these systems.

The first part of the project consists in improving the double crystal x-ray spectrometer on SIMPA to measure highly charged ions (HCI). This spectrometer is a world-unique facility, allowing to perform reference-free ppm-accuracy measurements on highly-charged middle-Z ions20, 23-25. The only other instrument allowing such measurements is at the Max Planck Institute in Heidelberg, but it uses a different method. The candidate will improve the setup by implementing piezo-electric devices for remote-control of the crystal adjustments (the spectrometer is under vacuum). This will save time and allow for a more accurate setup. He/she will also add a second x-ray detector to reduce the impact of the ion source intensity fluctuations. The improved setup will then be used to better understand energies and transition probabilities in some cases for which problems have been identified. We will thus perform high-precision measurements of the 1s2s2p 2PJ→1s2 2s 1 S1/2 transitions in elements other than S and Ar, where we observed these problems20 and of the 1s2s22p 1P1→1s22s2 1P0 in Be-like Cl and S as a measurement we performed in sulfur seems to indicate an increased disagreement with theory. This will improve our knowledge in particular of Auger shifts and widths of the observed lines. For the astrophysical problem identified in Ne-like iron, we will extend the measurements to Kr and Xe. The study of the evolution of the intensity ratio and energies as a function of Z will enable to better understand the reason for the large observed disagreement. In Xe, we also plan to measure more lines of adjacent charge states to improve our knowledge of more complicated systems. It was realized in a recent work we performed in collaboration with the Max Planck Institute in Heidelberg that the limitation of relativistic theory is preventing us from fully exploiting high-accuracy mass measurements26. A key component of this part of the work will be the utilization of newly-developed Bayesian analysis techniques for disentangling complicated atomic spectra, developed by M. Trassinelli at INSP. 27-29

Several years ago, both PhD supervisors were involved in an accurate measurement of the Lyman α transitions in H-like heavy ions30-32. In this new project, we will use the new GSI/FAIR21 low-energy storage ring CRYRING33, which is being commissioned this year, to remeasure the 1s Lamb shift in H-like Uranium using radiative-electron capture from the cooler electrons (approved project E138). This is a key measurement to probe high-field QED, complementary to the medium-Z measurements in Paris. This experiment will attain a 5 times higher-accuracy than presently available22, making it finally sensitive to 2- loop QED contributions4 . The measurement will use a quantum-sensing microcalorimeter detector based on magnetic transitions 34. First runs of these experiments are planned for spring 2021 or 2022. This is perfect timing for a Ph.D. thesis starting in the fall of 2020, as the student will be able to participate in the ensemble of the experimental setup and data-taking.

In April 2019, we performed a preliminary experiment for QED tests with muonic atoms at J-PARC in Japan, in collaboration with Pr. Azuma and his group from RIKEN, researchers from the university of Tokyo and of the Kavli Institute, and from the NIST in Boulder (HEATES international collaboration). We did the first observation ever of a transition in muonic atoms35 using a high-performance, new-generation quantum sensing TES microcalorimeter detector35, 36. A 5 year measurement program has been accepted to measure high-n circular Rydberg states in muonic atoms, with gains of 2-3 over existing sensitivity to higher-order QED effects. We did a first high-precision measurements on Ne and Ar in January 2020, in the 3-10 keV range. Two new detectors, intended to the 3-35 keV and 3-100 keV range will allow to study heavier elements, Kr and Xe, available for the next run in December 2020 and by the end of 2021, respectively. One key to experimental success is the calibration of the TES detector, which is extremely sensitive. We used a combination of many metallic targets excited with an x-ray tube during our January run. We plan to improve our calibration procedure by measuring transition energies in HCI with the Paris spectrometer, and compare them with the measurements performed with the TES. The candidate will play a central role in designing and performing this new calibration procedure, which will have important implications for our physics program, allowing us to gain another order of magnitude in sensitivity, and can be used for other experiments with TES detectors such as XRISM.

This project is thus, both by its physics objectives and applications, at the interface between atomic physics, low-energy particle physics, tests of the standard model and astrophysical applications. The PhD candidate will perform complementary experiments with advanced, state-of-the art, world unique technologies and instruments to provide the most-accurate atomic data available to date in highly-charged and exotic atoms. The project builds on the world-recognized expertise in relativistic atomic structure and QED calculations of the LKB group to provide the necessary information to exploit the experimental results to their fullest. A complete data analysis will include Bayesian methods developed by the INSP group for model testing, specially adapted for low-statistics exotic atomic spectra.

Role of the two PhD supervisors

P. Indelicato will be in charge of x-ray metrology and muonic atom experiments at J-PARC, and of providing theoretical support in QED and relativistic many-body calculations. M. Trassinelli will be responsible for the GSI/FAIR experiments and for developing tools for data analysis with Bayesian techniques.

The PhD student hired in the framework of this project will participate in the conception, construction, improvements, and use of the different experimental set-ups in Paris, at GSI, and J-PARC. Basic programming competencies in ROOT/C++ and Python are appreciated to analyze the TES and DCS data, as well as to use the Bayesian analysis suites. LABVIEW is used for control of some of the instruments. Good mastering of English is also necessary for working in the international collaborations in Germany and Japan.