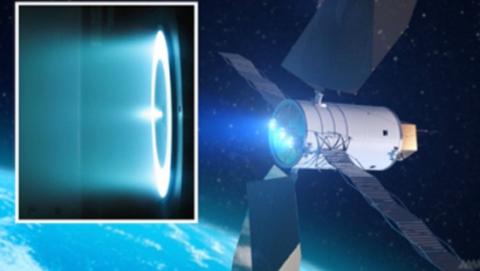 Introduction, state of the art, and objectives

Electric thrusters for space vehicles have been developed across the world since the 1960s, and have been since then deployed on hundreds of satellites and space exploration probes [1-5]. However, thanks to the recent increase in available power on spacecraft, the full potential of electric propulsion is now achievable. This is demonstrated by the emergence of all-electric communication satellites and projects requiring the deployment of large constellations of small electric-powered satellites [5].

jects requiring the deployment of large constellations of small electric-powered satellites [5]. Many electric thruster design concepts have been investigated (including arcjets, resistojets, Halleffect thrusters, gridded ion thrusters and pulsed plasma thrusters, see [5] for a recent review). However, the basic physical principles are unchanged: a propellant is ionized to form a plasma, and the ions created are accelerated out of the device by electromagnetic fields, providing thrust through the conservation of momentum. An efficient propellant should therefore be easy to ionize and have a high atomic/molecular mass, in order to yield a high flux of heavy ions for a given electric power, thus exerting a large force on the satellite. Xenon is currently the propellant of choice, due to its high atomic mass and low ionization potential. However, xenon is rare, expensive, and must be stored either in (heavy) high-pressure tanks or at cryogenic temperatures, significantly impacting the useable volume in satellites. The iodine molecule is an interesting replacement candidate, since it also has a high atomic mass and a low ionization potential. In contrast, it is cheap, and exists in the solid state at standard pressure and temperature, but with a conveniently high vapour pressure. These properties result in a storage density of iodine that is three times higher than that of xenon under equivalent conditions.

In an iodine plasma thruster, electrical energy supplied to electrons serves to ionize the iodine molecules to form a plasma. However, due to the molecular nature of this gas, electron energy is inevitably dissipated in other processes, including electronic, vibrational and rotational excitation and dissociation, producing various atomic and molecular iodine species, both neutral and ionized. Only ions can be accelerated electrically to produce thrust. However, these charged species can return to neutral ones through various reactions (recombination, neutralisation) causing substantial power loss. There is currently little reliable data available on most of these processes, preventing a valid description and modelling of iodine thrusters. The aim of the project is to create the first complete model of iodine plasmas. To achieve this goal, we will identify the major reactions impacting the efficiency of an iodine thruster and quantify them. Furthermore, these data will be implemented in an accurate plasma model. Ultimately, our simulations will be able to predict the composition of iodine plasmas in real conditions, allowing the determination of the optimal parameters for high thruster efficiency.

The aim of the PhD project is to compute the cross sections of the elementary collision processes occurring in the volume of iodine plasmas. The dominant species present in an iodine plasma are I, I2, I+ , I2+ , I- and I2. We will use the Landau-Zener Surface Hopping (LZSH) approach [6] to obtain the cross sections of the reactions taking place between these species. LZSH has the significant advantage that only adiabatic potential energy surfaces (PES) are needed, in contrast to most standard methods for which nonadiabatic couplings are necessary and tedious diabatization procedures must be applied. The PES will be computed with the relativistic equation-of-motion coupled-cluster method from the DIRAC code [7,8]. This approach directly includes spin-orbit coupling, which is an important effect in iodine, already at the Hartree-Fock level [9]. These cross sections will then be used to develop a first global plasma model.

Nicolas Sisourat will advise the PhD candidate on the LZSH study. He has over 10 years of experience in the simulation of inelastic electronic processes and has developed several state-of-theart codes for such simulations. Anne Bourdon is an expert in plasma physics, electric propulsion and their modelling. She will be the advisor of the PhD candidate on the implemention of the global model for electric propulsion applications. The complementary of the two advisors is a strong asset of the PhD project.

Originality and innovative aspects of the proposal

Although iodine was proposed as an alternative propellant nearly 20 years ago [10,11], there have been only a few experimental investigations of their performance (see [12,13] and references therein). Furthermore, to our knowledge, there has been only two modelling studies of the iodine plasma composition [14,15] owing, precisely, to the lack of available data.

The PhD project will fill this gap. To achieve its scientific goals a trans-disciplinary approach is essential. We will tackle the challenging task of considering all aspects of an iodine plasma. Combining state-of-the-art relativistic electronic structure calculations, simulations of atomic and molecular collisions and plasma modelling will provide a description of iodine plasma thrusters with unprecedented accuracy, which will have significant impact in the rapidily growing field of electric propulsion.

Relevance of the project for the Initiative Physique des infinis

As detailed above, the aim of the PhD project is to provide a detailed and accurate description of iodine plasma thrusters. Such a fundamental and ambitious goal requires improving our understanding of the atomic and molecular processes taking place in the plasma as well as the physics of the plasma itself. Furthermore, the need for small electric-powered satellites is on a constant rise owing to their commercial and military applications. The PhD project will therefore have a significant societal impact. These objectives are at the core of the Initiative Physique des infinis.

Profile of the PhD Applicant

The PhD applicant should have a master degree in Chemistry or Physics. She/He should have good competence in programming and numerical methods. Knowledge in plasma physics and/or theoretical chemistry approaches will be an asset.

Publications of the advisors that are relevant for the present proposal