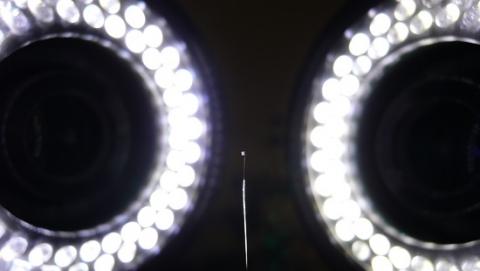 The solar wind is a supersonic plasma stream frozen into an interplanetary magnetic field accelerated away from the Sun. Solar wind measurements at a wide range of distances from the Sun show that radial evolution of ion temperature significantly differs from the adiabatic expansion (Cranmer et al., 2009, Elliott et al., 2016). It means that there must be gradual heat input into the solar wind plasma that begins in the corona and extends far out into interplanetary space (Parker 1963; Leer et al. 1982; Tu & Marsch 1995; Goldstein et al. 1995; Marsch 1999; Hollweg & Isenberg 2002; Cranmer 2002; Matthaeus et al. 2003). Solution of the solar wind heating problem is extremely important both for understanding the structure of the heliosphere and for adequately describing the atmospheres of distant stars. The modern theories suggest that turbulence [Bruno & Carbone 2013] and emerged coherent structures [e.g., Greco et al. 2009, Alexandrova 2008, Lion et al. 2016] can significantly contribute to the solar wind heating, but there is no well accepted concept for a mechanism responsible for such heating.

The aim of this PHD project is to study coherent structures in the turbulent solar wind (e.g., current sheets, shocks, vortices) and their role in ions and electrons dynamics. To approach this problem, the candidate will combine multi-satellite data analysis at 1 AU with NASA/MMS and ESA/Cluster missions, theoretical models, and numerical simulations. The results will be then applied to understand new measurements of the NASA/Parker Solar Probe (PSP) and ESA/Solar Orbiter (SOLO) missions closer to the Sun.

These two observational steps will be done at LESIA/Paris Observatory (Meudon) under the supervision of Milan Maksimovic and in collaboration with Olga Alexandrova. The observational results will be then the basis of the modeling and numerical simulations, which will be done in IKI (Moscow) with Anatoly Petrukovich, in collaboration with Anton Artemyev in UCLA (Los Angeles, USA). Main theoretical approaches include perturbation theory for resonant Hamiltonian systems and theory of adiabaticity destruction in Hamiltonian systems with separatrices. Using these approaches, efficiency of ion and electron scattering by coherent structures of different configurations will be investigated. Numerical simulations of ion and electron interaction with coherent solar wind structures will include massive test particle simulations and self-consistent hybrid simulations.

The final step will be comparison of 1 AU observations with the new measurements in previously unexplored regions made by the Solar Orbiter and Parker Solar Probe closer to the Sun.

Justification of the scientific approach:

In order to understand the solar wind evolution and heating, we propose here to do the data analysis of Cluster and MMS at 1 AU, SOLO at 0.3-1AU and Parker Solar Probe at 0.05-0.3 AU. Note that the instrumentation is quite different on the four space missions.

Approaching the Sun, the conditions are such that important constraints have been made on the instruments and data telemetry for PSP and SOLO. The most sensitive instrument ever measuring turbulent fluctuations at kinetic scales (where one expects particle-turbulence interactions) is Cluster/STAFF (search coil magnetometer), which can resolve ion and electron scales at 1 AU. MMS has been designed for the Earth's magnetosphere studies (including solar wind between the bow-shock and the magnetopause, i.e., within the magnetosheath) and it provides the highest cadency for ion and electron distribution functions, but also less sensitive magnetic measurements at kinetic scales. PSP and SOLO have less sensitive search coil magnetometers than Cluster/STAFF, the particle instruments have lower cadency than MMS. Both missions are composed of a single spacecraft (which makes it impossible to separate time and space variations), by opposition with Cluster and MMS.

To resume, using multi-satellites Cluster and MMS, we will be able to separate between time and space variations and fully characterize coherent structures. High quality measurements of turbulent fluctuations and particle distributions at 1 AU will allow a detailed modeling. Then, using our knowledge at 1 AU, we will be able to interpret properly PSP and SOLO measurements closer to the Sun.

It is crucial to have a strong observational and theoretical background thanks to the study proposed here to interpret correctly the new observations of PSP and SOLO and advance our understanding of solar wind physics.

This project is in full adequation with the "Initiative Physique des Infinis" as far as it aims to better understand the behavior of (charged) particles in (turbulent space) plasmas.

The problem of turbulence is one of the open problems in modern physics. Here we address the electromagnetic turbulence in astrophysical collisionless plasmas, where the usually (collisional) dissipation is not efficient. This problem covers a very large rangе of scales, from ~ 1AU to very small (for astrophysics) ~ 1km. Precisely, from the propagation of magnetic structures over Sun-Earth distance (scales ~ 1 AU), to scales of turbulence/particles interaction (~1-1000 km).

The aim of the project is to understand physical processes which govern in the complex turbulent space plasmas and their impact on the solar wind expansion in the Heliosphere. Thanks to the proposed collaboration between LESIA and IKI, the candidate will use the diversity of approaches (theory, modeling, data analysis of different spacecrafts in the Heliosphere).

The student will participate in doctoral schools devoted to plasma physics (from laboratory to astrophysics, like the one organized every 2 years in 'Ecole de Physique des Houches', e.g., http://geoffroy-lesur.org/plasmas2017/) and to satellite data mining.

Role of each supervisor and the scientific skills provided:

Knowledge of plasma physics. Some knowledge of space physics and heliosphere are desirable, but not obligatory.

Publications / productions of the supervisors in connection with the project

Organization of the co-supervision LESIA/IKI As far as the PHD will be done in 2 institutes, we find it important to mention the following organization. Regular teleconferences between the two groups will be carried out during the 3 years of the PHD project. Moreover, during the periods spent in Paris, supervisors from IKI will visit LESIA. A workshop will be organized by Paris Observatory at CIAS (https://cias.obspm.fr/) during the first visit. During the periods spent in Moscow, supervisors from the Paris Observatory will visit IKI. These visits are important to maintain regular contact between the two teams and allow good development of the PhD. We plan the following time repartition between two institutions: